Artist of the Week: Piñata 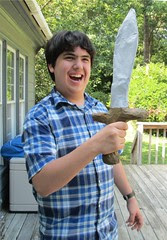 Jacob, a photo by Teckelcar on Flickr.
This week's artist is a rather valiant Jacob.

I took this photo of him near the end of the school year, The sword he is wielding is in actuality a piñata. It was an extra credit project for his Spanish class and he really knocked it out of the park. His teacher liked it and asked if she could keep it as an example for future classes. Jacob was happy to gift it to her and I was even happier to not have it add to the mess in our house.

Jacob did, however, bring it home to show off and have a few pictures taken. He was justifiably proud of his work and wanted us to see his creation. Then it was packed off back to school a couple of days later.

sword, a photo by Teckelcar on Flickr.
He had told me in advance he was going to bring home his piñata, but never told me what it looked like. I had a mental image of the type you find at parties, you know something like these seven pointed stars that are filled with candy. So you can imagine my surprise when he came out of the school with a sword. A really nice and sturdy short sword. I know they can be any shape, but I (wrongly) assumed it would be a traditional shape since it was made for Spanish. Ah well, live and learn.
Posted by Sarah at 11:28 PM