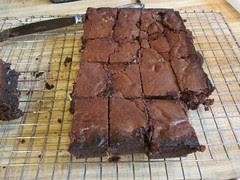 Scientific Brownies, a photo by Teckelcar on Flickr.
Today two of Rebecca's classmates came over to work on their STEM/science fair project. They were tasked with making a device that would allow an uncooked egg survive an approximately 8 foot fall without using a parachutes. They had created an initial prototype a couple of weeks ago and came to our house to test using the second floor area that overlooks the great room.

They worked away and came up with a second design and decided to test it. An egg was procured, placed in the device, and dropped over the railing. The shell cracked, but the membrane remained intact, this counted as a success However just to be sure they tested two more times, each time with a new egg. Meanwhile Rebecca asked what she should do with the cracked eggs. I told her to set them aside, I would come up with a use for them.

As they discussed more testing I cut them off. I envisioned my remaining eggs being destroyed and that was not an option. I told them to weigh an egg and use something else as the test subject. Rebecca had some modeling clay and it was perfect for the job. As for the cracked eggs, well it turns out my brownie recipe uses three eggs.
Posted by Sarah at 11:55 PM