Super Troopers For the Win! 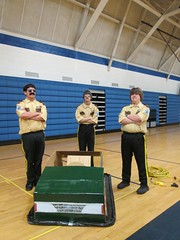 This year has been Jacob's senior year in high school. It has been a wonderful experience for him and he has learned so much. This fall he will be at Virginia Tech and our house will no longer be quite so full.

As his high school career has been coming to a close he had one big final project, the hover car. The class was divided into teams with the assignment to build a hover craft. An integral part was to have a theme for the creation, not just for the car but for the team members as well. After some hard lobbying by Jacob's two team mates, they settled on the movie "Super Troopers." I found some "trooper shirts" at Party City and the guys used yellow duct tape for the stripe along the pant leg. Aviator sunglasses and a big old fake mustache for Jacob rounded out the look.

Today was the big competition for all the hover crafts. Team Super Troopers had created a very quick and nimble car, It passed the maneuverability portion with great style and speed. The team's driver, the other Jacob, was able to swing around the car and come to a very impressive stop at the end of the course. The next portion was the timed races. They didn't have the fastest car, the Duck Dynasty entry went off like a shot, but it's maneuverability won the day. They ended up winning the competition by a two second margin.

Jacob at one point observed that today they proved that a '93 Crown Victoria was faster than the USS Enterprise.

And although it was pretty insubstantial stuff, that movie had some nuggets of good comedy, meow.

Sarah, are you okay, sweet baby?

All is well, just dealing with the reality of two kids about to be Var Mitzvahed and my eldest going off to college! Busy days indeed.

As Marquette starts up classes, thinking about your oldest. Where did the time go? Hope it was a wonderful, sweet summer, with the celebrations, with time with the kids and prep for the changes this fall.