Artist of the Week: Latkes! 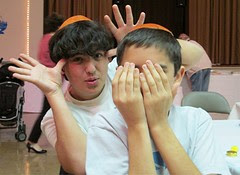 brothers, a photo by Teckelcar on Flickr.
This week's artist is Nate, not the goofball behind him.

Nate has decided that he no longer wants to be photographed, he turns his head, throws his hands up, and sometimes flings himself onto the ground. It has become a sort of game between us. He'll see me with my camera in hand and instantly goes on the defensive while I try to sneak in a shot when his attention is elsewhere. The result is that I get a lot of random shots of arms and legs with an occasional gem like this with an endearingly goofy Jacob in the background. 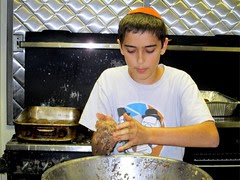 latkes maker, a photo by Teckelcar on Flickr.
Fortunately he is not completely impossible, if I stamp my foot Nate will allow me to take a few pictures of him. So I was able to capture him in the act of making latkes.

Our congregation had it's Hanukkah last Sunday and Nate wandered into the kitchen whilst Meryl and I were cooking up the last of the latkes. He wanted to help out so we showed him the ropes. The oven is an ancient behemoth and was a bit intimidating with the pans of sizzling oil, but he was soon pitching in and making latkes.

Freed from the stove I was able to scrub down counters and clean up the bevy of food processors that had been pressed into service. It was nice having an eager extra pair of hands.
Posted by Sarah at 11:07 PM