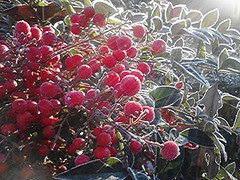 sun and frost, a photo by Teckelcar on Flickr.
It looks like my new camera will be arriving Tuesday. In the meantime I've taken apart the old one and had no luck getting to the heart of the matter.

At least I was able to assemble it and have it functioning at the same level, ie the LCD screen lights up and promptly announces "zoom error" and doesn't focus one whit. I did have one screw leftover, but my engineering son observed that I had improved the camera and made it more efficient since it now uses less materials. Either way I felt good about at least giving a last ditch effort before chucking the whole mess. 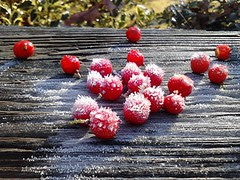 frosty berries, a photo by Teckelcar on Flickr.
On the photography front I have been learning the limitation's of my cell phone's camera. It take decent photos for what it is. The focus isn't quite up to snuff, I had to establish the minimum distance when taking this particular set of pictures. The details of the frost on the berries was very hard to capture. I had to keep pulling back to get the crystals in focus and even then it was a rather soft focus.

I like the camera feature, but I'll be much happier then my camera arrives.
Posted by Sarah at 10:10 PM