Artist of the Week: Sand Huts 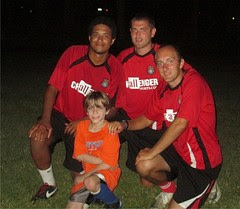 Soccer Max, a photo by Teckelcar on Flickr.
Max is this week's artist and he is pictured here with the coaches from last week's British Challenger soccer camp. Originally Jacob was to be the one attending the camp, but the Thursday beforehand he did something wonky with his foot and was unable to attend. As we were trying to figure out to do Max mentioned that he wished he was going to te same camp.We didn't sign him up this year because his travel team has a team camp scheduled the following week. Since Max and Jacob are in the same age group we substituted Max for his brother.

The coaches were fine with the idea, but suggested that maybe on the following day Max should come back and be with the earlier, younger group. I told them to just let him give it a try, Max may be small, but he is a good player. When I came back three hours later to pick up Max the coaches agreed that Max was in the right group, he would be running rings around the younger kids. 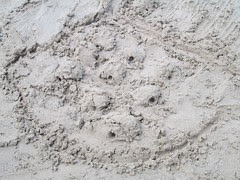 Sand huts, a photo by Teckelcar on Flickr.
Which brings me to Max's sand constructions, he is a good little builder that likes to make rings around his buildings. We had gone to visit friends in Syracuse, NY and went to a couple of lakes in the area. Max always views a beach as an opportunity to build. He made a series of small huts or caves with well defined moat surrounding them. Off to the upper right side you can see a field where the crops are grown. He then went on to make bigger and better structures which I did not photograph. Silly me, I wanted to swim and socialize, not stand around and take pictures. But really he made quite a complex, which was very challenging considering how crowded the beach was at the time.