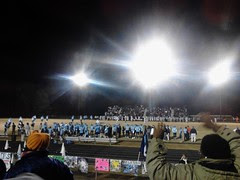 Friday Night Lights, a photo by Teckelcar on Flickr.
The High school football season is coming to a close this weekend and it has been overall a good one. I finally hied myself to two games to see what it was like in person.

My high school had a terrible football team, I think they never had a winning season while I was there. The big athletic stars were the soccer team, state champions at least every other year. Also we never had a marching band, so this whole high school football/marching band thing is very alien to me. Dartmouth (our local college) has a football team, but I never went and their marching band is a "scatter band," wasn't much of a point of reference either.

What I have learned the past four seasons is that the game is important, but a huge part of the experience is the socialization. kids get to wander around, eat junk food, talk, goof off, and watch their team in action. I kind of understand the appeal of going to the games. I still don't "get" football, but I can see how being at the game is fun.
Posted by Sarah at 11:45 PM