Artist of the Week: Winter Concert 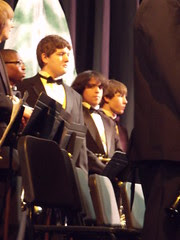 Tuxedo Jake, a photo by Teckelcar on Flickr.
This week's artist is Jacob along with the high school band and I must state he looks incredibly handsome in his tuxedo. The shaggy hair adds to the whole musician esthetic, he definitely looks like his brother Nate in this particular photo.

Last week was the winter concert and as always, holiday themed music was on the program. In the following video the first and last songs performed by the band are showcased.

The first one is "Jingle Bells Fantasy" by James D. Ployhur, the same fellow that wrote "Pomp and Circumstance." I think the band did a great job playing this song, I just wish my filming skills were a bit better to do the performance justice.

The next song in the clip below is "Sleigh Ride" by Leroy Anderson. In addition to Jacobs band, the school's symphony  orchestra are preforming as well. There wasn't close to enough room onstage so the strings had to play off the stage and down in the orchestra pit. The combined pseudo symphony orchestra did a bang up job. This was the first time the Orchestra and band had ever been combined and I think they did a bang up job.

So sit back and listen to a little holiday music.