Artist of the Week: First Concert 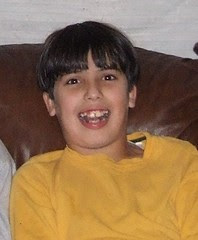 He is taking band in Middle School and as I have mentioned before, his instrument is the trumpet. He has come long way the past few months and is slowly able to play recognizable tunes. He is getting a feel for his instrument, which is remarkable because of all the mucking about his Orthodontist is doing.

Last week was the the Middle School Winter Concert. We turned out in force for the event. This was a far happier occasion for us compared to the last time Jake was in a concert. (That was for the Pyramid concert and I'm still irked over that one.) His attendance was mandatory, but it is part of the whole band thing and we fully expected it. Oh and the good part, it's free.

Anyway, we showed up at the appointed hour and shooed Jake off to the band room. 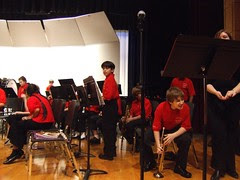 Jake
Originally uploaded by Teckelcar
Then we were stuck out in the hallway to wait for an hour the whole thing to start. Since there were no chairs in the hallway we retreated to the car to watch a DVD. I must say it is very nice to have this option when you are stuck waiting for an hour with three kids in tow. Mind you there was still some whining when we got back inside, but nothing on the same level if we had been stuck in a very boring hallway. When it was close to the start time we peered in the auditorium and decided it was time to find a seat. Other parents joined and the seats started to fill.

The concert was divided into three sections. First up was the Beginning Band students followed by the Intermediate Band and then the Advance Band rounded out the evening. Below is the first song played by Jake's group.

They did a good job. The band is clearly at the beginning level, but they were able to stay together. I think it is a remarkable performance considering they all starting playing their instruments for the first time just a couple of months ago. And I think quite a few students didn't even know how to read music. If you are interested the other three songs played by Jake's group were Cardiff Castle, Ode to Joy and Holiday Sing Along (with a guest vocals supplied by Rebecca!).

It will be fun to see how much they progress at the next concert.
Posted by Sarah at 11:57 PM