Last Friday I picked up Crunch's remains from the vet. It was a hard trip, I sobbed in the car before going in and it hit me again when I got back into the car. 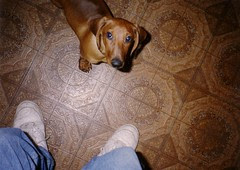 first picture
Originally uploaded by Teckelcar
This is one of our first pictures of Crunch. He was, as all puppies are, adorable. Rally thought otherwise and was initially quite peeved with this goofy red interloper. But in the end it wasn't such a bad thing especially once she figured out how to trick him out of the comfy spot in the kitchen.

We had gotten Crunch in January of 1993. We wanted another dog and we thought Rally would like the companionship. He just kind of fell into our laps. His breeder had called us wondering if we were still looking for a dog. I had spoken with her months earlier when we were first looking, but she had nothing to offer at the time. Apparently I had made a good impression and when they had decided that it was time to place "Nestle" they gave us a call. 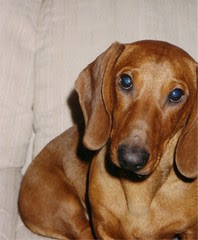 young Crunch
Originally uploaded by Teckelcar
His original name was Nestle as in Nestle Crunch. His bite started to go off and that was why we were offered him. When we went to get him, up in the wilds of Ramsey, Minnesota, his bite had improved. They asked if it was possible if we could show him and thus a hobby was born. We thought Nestle was a weenie name and called him Crunch instead. Crunch grew to be a handsome dog, a canine Fabio according to my Brother in Law. He was also a natural show dog and I was able to handle him myself to his champion ship. Not bad for a novice handler.

Because of Crunch, Dianne (his breeder), became a very good friend. She then pointed me in the direction of the local dachshund club and I made a lot of friends in the "dog world." The local club was and still is very performance oriented and it was a given that if your dog had any talent in the field you should try to put a Field Championship on it along with a bench or rather show Championship thus earning the dog the title of Dual Champion. Crunch was a natural in the field, his only problem was the extreme difficulty I had in getting him back. He was notorious as the dog that would take off when the judges would ask for the handlers to pick up their dogs. His saving grace was his unfailingly happy demeanor and the fact that anybody could pick him up. Everybody loved Crunch because he loved everybody. 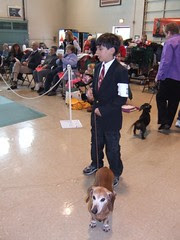 Waitng to go
Originally uploaded by Teckelcar
In time we were able to put a Dual Championship on Crunch. It wasn't until we moved back East that we realized what a big deal a DC was. At that point I decided to go whole hog and try to get a Versatility Certificate on him. It is a high honor from the Dachshund Club of America and not every dog can earn one. In 2000 he qualified and we headed out west to the National Specialty show in Portland Oregon in 2001. I was pregnant with Max and Rebecca and as big as a house. I was determined to be there when his plaque would be announced at the banquet. It was a huge ordeal flying out to Portland with two kids and a dog, but we made it. As an added bonus we got to spend time with a dear friend of mine from college. She had married the previous year and we had flown out for that sans kids.

As the years slipped by I would occasionally bring Crunch out to show. He loved going to shows and always put on a good show. At the tender age of 11 1/2 he sired his first litter and a few months later John, his son, came to live with us. When Jake turned 10 we got him a Junior Handler number and he would take Crunch into the ring while I showed John. Crunch was very happy with his new career and was very patient with Jake. But I could she he was starting to fade. 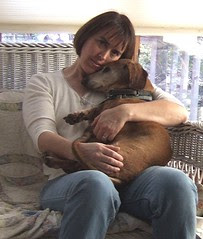 me and Crunch
Originally uploaded by Teckelcar
He could still move like a dream, but he was slowing down. Crunch was spending much more sleeping and then we got John. John was a good addition to the household. He perked everybody up and he and his father would endlessly wrestle at my feet. With a look Crunch could flatten his son. John knew who the boss was.

But then at the end of summer Crunch started to falter. He wasn't as sure on his feet and his nose started to bother him. It looked like him had a nasal tumor. We never got a definitive diagnoses, because it would mean sedating him and the last time we did , about 8 months previously, it took 4 days for him to recover. I promised him I wouldn't do that to him again. At 15 he was too old. Then he stopped wrestling with John and not long afterwards to eat. I was able to tempt him along for a while, but in the end it was time.

The last picture was taken a few days before his final trip. He was my dog and always loved to be in my lap.
Posted by Sarah at 11:59 PM