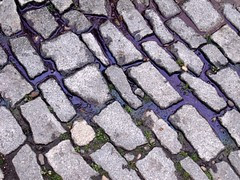 Purple, a photo by Teckelcar on Flickr.
Sometimes even pollution can be beautiful.

As I mentioned before, it was my turn to drive the carpool to Sunday school and I had my camera with me. However graffiti was not the only thing on my mind. I keep my eyes open when I'm up in the city because sometimes I find beauty in the oddest places. It is almost always worthwhile to have a camera on hand. Case in point was the short walk from the parking lot down the alley to Sunday school.

While tromping down the narrow cobblestone road (yes Richmond has plenty of cobblestones) I espied a flash of bright purple between the stones. It was so very striking amongst the grey rock and green moss, I just had to get my camera out. The picture really doesn't do it justice, the color was far more vivid in person. Of course the big question was why and where did it come from. 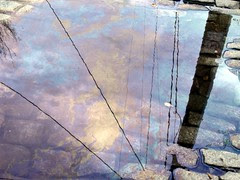 color on water, a photo by Teckelcar on Flickr.
I got my answer just a few steps later.

The purple was from what I presumed to be gasoline overlaying the puddle that was draining through the cobblestones. The gas formed a beautiful iridescent overlay on the water. The sight was mesmerizing. I know the spill wasn't doing the environment any favors, but the effect was amazing.

I do my best to be a good steward of the planet and I would never deliberately spill such a noxious item. However I do appreciate beauty in even the ugliest of things.

That's one of the many reasons I liked living in Richmond. Crappy alleys and all. :P