Artist of the Week: Cartoon, Cartoon 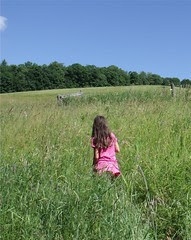 Rebecca, a photo by Teckelcar on Flickr.
This week's artist is Rebecca. I took this picture of her when we went up North to visit family.

My mom has moved to an independent /assisted living facility and no longer has a house that can hold us all, but my cousin has a house nearby. He has graciously allowed us to use his second home in Vermont when we visit my mom. It's an old farmhouse situated on a hill north of where my my lives (it is where we went sledding last winter). It's in a gorgeous area and the kids explored the field surrounding the house. I miss her old house, but it looks like my cousin's place will work out very nicely.

Anyhoodle, enough about where we were last week.

Mark and Jake, a photo by Teckelcar on Flickr.
I was tossing out various bits of detritus about the house when Rebecca espied a small white board. She asked if she could have it. She had a dry erase set of markers from school, but no way to use them. I let her take the board and promptly put the whole thing out of my mind.

A few days later she showed me the red image on the left. It is a rather accurate picture of the character Mark Chang from the cartoon "Fairly Odd Parents" on Nickelodeon. Rebecca asked for me to take picture and once it was taken she happily wiped clean the white board. A few days later she followed up with another cartoon character, Jake the dog from the Cartoon Network's "Adventure Time." And once again she did a bang up job. She certainly did not need to write down Jake's name.

Rebecca has developed quite an eye for copying cartoon characters.
Posted by Sarah at 10:59 PM