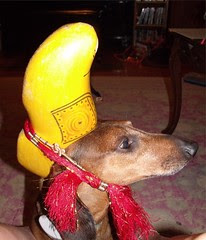 clogged, a photo by Teckelcar on Flickr.
While up North my mom had me go to her storage locker and figure what I could take back home to Virginia. I had, mistakenly, thought that I had long since emptied her home of all my keepsakes. However during the big clean out of her old place a collection of boxes labeled with my name were found up in the loft in the garage. I had been oblivious to their existance and I was curious as to what they held.

The first box I pulled was heavy and a cursory inspection reveled two pairs of wooden clogs, a toy horse pulling cart, and miscellaneous rocks and/or fossils. This was clearly my junk so I pulled it out the box to load into the van.

The next box in the stack, clearly labeled "Sarah's odds and ends" contained... sheets. It looked like a box has been reused from a previous moved and the label had never been updated. At that point I declared one box was enough to stuff in the van and called it a day.

Clog Pontiff, a photo by Teckelcar on Flickr.
So now we have two pairs of clogs in the house, much to the children's delight. Max and Rebecca periodically clomp about the house and a rediscover how loud wooden shoes on hardwood floors. Fortunately the clogs are not particularly comfortable and fairly quickly the noise stops with an end result of the clogs being scattered about the house.

Which brings me to the rather odd pictures in this post.

While sitting on the couch the other day with John at my feet I picked up one the errant clogs and thought it would make a pretty good hat for a dachshund. John patiently endured having a wooden shoe balanced on this head with a red silk cord tying it on. I thought it was hilarious and got somebody to fetch me my camera.

The top picture clear shows what was going on, but the bottom one is the best. The angle of the picture is such that the shoe looks like one of the pope's hats. Combined with John's expression and you get the Clog Pontiff.