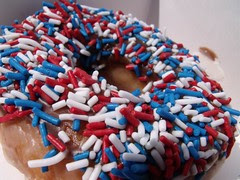 Happy Birthday Krispy Kreme, a photo by Teckelcar on Flickr.
And a big happy 75th birthday to Krispy Kreme.

July's second challenge for Proct MCP was "Red, White, and Blue." I wasn't sure how I was goingto do it since I missed both fireworks and my subdivisions little parade held every Fourth of July. I could just stage something, but I was hoping to do better than that.

Meanwhile today was Krispy Kreme's 75th birthday. It celebrate the dough nut shops were offering for every dozen dounghnuts purchased a second dozen of original glazed could be had for 75¢. When I pulled up at 9ish the drive through line was wrapped all the way around the building and even extended out on the street. Doughnut loving Richmond was out in full force.

As I slowly edged into the parking lot a space freed up and I was able to park. The line was no better inside, but at least I was no longer wasting gas while the car's engine endlessly idled. As I waited and waited I called home (with no luck) to see if there were any requests, took a picture of the doughnut production line, and posted said picture on Facebook. Eventually it was my turn and I picked out and assortment of chocolate iced doughnuts, plain, with sprinkles and custard filled. That pretty much covers what ever special request that the kids would have made if they had ever answered the phone.

Anyhoo, as I stared at the case awaiting my turn I noticed the chocolate iced with sprinkles had red, white, and blue sprinkles.

Woot! I had my red, white, and blue picture.

And so it came to be that Krispy Kreme saved my bacon with Project MCP.