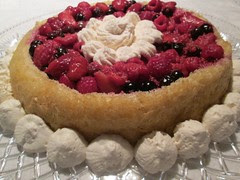 Savarin, a photo by Teckelcar on Flickr.
Last week's challenge over at Baking with Julia was Savarin. Yes I'm a week late, but it is the end of school and things are even crazier than usual. Between potluck dinners, end of soccer season parties, and hey lets give 5th grade pizza for lunch, I've been a wee bit busy. Also in my defense I made a complete hash out of my first attempt.Fortunately all I wasted was an egg, a bit of flour, sugar, and yeast. I had enough sense to toss the flat mess and not just plow forward.

So as you can see by the picture here I was very successful in the end.

As I mentioned before in my first attempt, the bread base was a flat and miserable failure. The second time around I halved the rising times and doubled the dough. Combine that with  going  all out on greasing the ring mold, I had a far more successful go of it. It still slumped a bit, but once you start soaking the bread with simple syrup, splashing a bit of pear flavored vodka (the recipe called for pear eau-de-vie and that's the closest I was going to get without shopping, hurrah for freebie sample bottles come with the regular stuff), filling the hole with whipped cream and ladeling warm berry sauce on top, who cares.

I admit I was a bit dubious of the whole thing, I nibbled on the flop and found it wanting in flavor. However, the full on savarin was fantastic. I don't know if I'll make it again, it was easy but certainly required a huge amount of tarting up.

Sweet and That's it said...

I'm so glad you did not give up and loved it , 'cause it does look great and yummy!
I made an orange & chocolate Savarin and we all liked it.