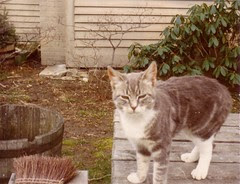 Meeshu, a photo by Teckelcar on Flickr.
At this point in my life I'm a dog owner, but I still love the kitty cats. Between allergies and having dogs that would eat cats, it's just not a good idea to bring a cat into our household.

However, a long time ago I did have some cats. Way back in the 70's we acquired my first cat. Since we are all allergic she was a barn cat. I remember going to pick her out and bringing her home. I named her Meeshu (ME-shoe), I have no idea where that name came from, and loved her dearly.

We lived on a dirt road and had a huge old barn. She ranged about, but was always happy to go on walks with me in the fields around our house. She was an excellent mouser, and had one odd trait. She loved to be stroked, but on her terms. When she had enough she would turn her head and ever so gentle grab your hand with her mouth. I wouldn't call it a bite, since she never ever broke the skin. 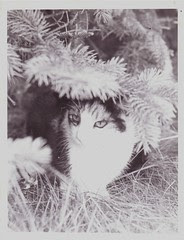 Tasha B &W, a photo by Teckelcar on Flickr.
A few years and an interstate move later we acquired another cat, actually a whole family. Mica, a solid grey, has dumped at our house. She kicked Meeshu out of the cellar (we had a catdoor in one of the windows). At first we thought she was pregnant, but not long after we saw her nursing her kittens in the dog yard. It was a fascinating litter, one Siamese, two calicoes, and two black and whites with tuxedo markings.

Obviously Mica got around.

We figured out two of the fathers, the black and whites looked like the stray hanging around out barn. We called him Boris and he was like a shadow, never letting us near. The calicoes were most likely the result of a rendezvous with one of the many orange and white cats about two miles away. The orange cat house was legendary with my fellow school bus riders. Every day we would count all the visible cats, I think the highest total was 20 and each and every one of them was orange and white. As for the Siamese, that was a complete mystery.
Sadly the Siamese got nailed by one of the dogs. One black and white, Tippy, was given to our neighbor. The second was humanely put down as it was completely feral and vicious. It bit me while it was scruffed by twisting around in its skin. When we took it to the vet it climbed halfway up the bare wall and spat at us. The vet, who was not really on board with the whole putting it down, agreed that it was dangerous and it would be inhumane to release it in the wilds of VT. Once the kittens were weaned we had Mica spayed and found her a good home. She did not get along with Meeshu and very clearly wanted to be an indoor cat.

Thus leaving the two calicoes, Pablo and Tasha. We planned on keeping just Pablo, but when my mom picked Tasha up to take her to the shelter she said "If you purr you can stay. " And right on cue Tasha started purring. So for the summer we had three cats. Unfortunately Pablo got hit by a car that fall. Then we moved and Meeshu disappeared the day the moving trucks came. It was a local move and we kept returning to look for her, but she never did turn up. Tasha, however stayed on and lived to become the oldest cat in town. Seriously the vet called us when she was going through her records and realized exactly how old Tasha was at the time. I think she was at least 23 before she faded away. Not bad for an outdoor cat.