Artist of the Week: Summer Project 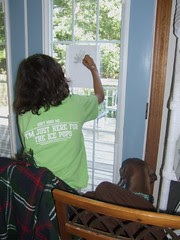 Nate and John
Originally uploaded by Teckelcar
This week's artist is Nate.

The project entails reading The Captain's Dog- My Journey with the Lewis and Clark Tribe, drawing (or tracing) examples of flora and fauna Lewis and Clark would have encountered, and finally pictures and a paper on a native American tribe that Lewis and Clarke met during their trek.

As any parent can imagine there was a fair amount of whining at the beginning of the summer about the injustice of having to do more than just reading over the summer break. He got little sympathy from me. Instead I gave him the book and told him to start reading. 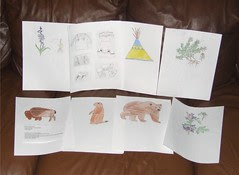 Captain's Dog project pix
Originally uploaded by Teckelcar
And, in the end he did.

Fortunately it is a well written book and he was able to finish it in good time. The harder part was getting him to settle down and start working. We decided it was best to get the pictures out of the way. I had shown Nate how to trace pictures by taping the original and the blank paper onto a sunny window sometime last year. He was able to knock out the fauna and flora in about two weeks.

I think they are all turning out nicely. He was really thrown by the idea of all the drawings, but he took heart when he learned that tracing images was fine with the teachers. I think breaking it down to one portion per week also prevented Nate from being overwhelmed.

Now he is just starting work on the tribe portion of the project, he has just under half the pictures down (one still needs to be colored). Nate should be able to finish those up by the weekend. Then he has two weeks to write a less than two page paper. That should be enough time, even with all the goofing off he is wont to do.
Posted by Sarah at 11:59 PM