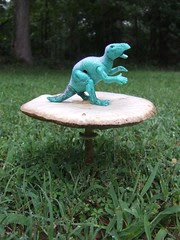 dinoshroom
Originally uploaded by Teckelcar
We have, or rather had, a large mushroom growing in our backyard. I've watching it the past few days, waiting to see exactly how big it would get.

This morning when I looked out I saw it had flattened out, a good indicator that it wasn't going to be around much longer. The top of the mushroom was roughly 5 and 1/2 inched in diameter. I thought I should take a picture, but not just any old boring picture. I was going to have fun with the fungus.

Since the mushroom was fairly level I decide a toy would be just the thing to place on top. I dug around in the toy box and pulled out a dinosaur. The kids were baffled as to why I was putting a dinosaur on the mushroom. My answer that it amused me just barely cut the mustard.

Of course what I really wanted to take a picture of was the Caterpillar from Alice in Wonderland on top of the mushroom. Unfortunately we have no caterpillars and I had to satisfy myself with the dinosaur. I then plucked the mushroom out of the lawn and tossed it in the woods 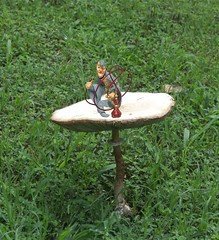 Alice in Wonderland
Originally uploaded by Teckelcar
Not long after I was on the phone with Meryl and mentioned how I had wanted to put a caterpillar on top. She asked if I took some plain mushroom pictures. If I had I could add in the caterpillar to the picture.

Luckily the mushroom was still intact. All I had to do was insert a bamboo skewer through the stem and the stick the skewer into the ground.

Happily, it worked. I was able to snap a few pictures and digitally add in my hookah smoking caterpillar.
Posted by Sarah at 11:42 PM