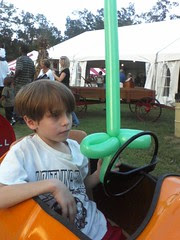 Max
Originally uploaded by Teckelcar
This week's artist is Max. This is a rare picture of him not mugging for the camera. I think he is one of the hardest of my four children to photograph. He is even harder than Jake, who doesn't even want to be photographed. After the initial silly picture of him brandishing his balloon sword, I got this shot of him calming contemplating his upcoming barrel train ride.

The barrel train is a County Fair staple. For years the kids have looked forward to riding it. Sadly, however, Jake and Nate have gotten to be too big and too old to ride on it any more. I think the dynamic duo will be riding it for a few more years. Until they get too old I'll be taking pictures of them on the train.

AS for the pictures, it was a good thing I took them this year. About halfway through the ride Max's balloon sword popped. He had the most tragic expression when the train came back in view. He wasn't completely mollified when I told I had taken pictures, but the knowledge did lessen the sting a bit.

Sea turtles and fish
Originally uploaded by Teckelcar
As for this week's picture it is one of Max's tiny detailed drawings. It is just 4 inches by 8 inches. It get a better look I recommend that you click on the picture. When Max was drawing it he started with the sea turtle slightly rearing out of the water as it swims. He then added the smaller baby sea turtle swimming just in front. There are also fish leaping from the water, a couple of sharks (the triangle fins in the water), and a boat.

Max was inspired by a picture I found for him of a sea turtle paddling in the water in that half raised position. The rest all came from his own imagination. What I like about this picture is that even though it is very tiny with teeny tiny figures it beautifully conveys the vastness of the ocean. Not a bad trick.
Posted by Sarah at 11:45 PM