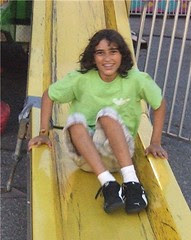 Nate
Originally uploaded by Teckelcar
This week's artist Nate in an update from a post way back in August. This picture of him is also from back then. Well actually it was a couple of weeks later, but it was still August. I had taken this photo at the county fair when I took Nate and his best friend. One of the rides, or rather attraction, involved a big slide at the end. I watch the two of them wade through the ball pit and cross back and forth on the walkways that led up to the slide. Both of the boys had huge smiles on their faces as they zipped down.

As for the project, Nate did indeed finish it just in time. He did cut it very close in the end, but he was able to write a decent paper and create a bibliography. He handed the completed project on time and he was fairly pleased with the end product. The hardest part was finding brads or a suitable folder with the brads built in. The project was due during the second week of school and there were no brads to be found on the shelves after the big push to get back-to-school supplies. So in the end we settled on a folder. 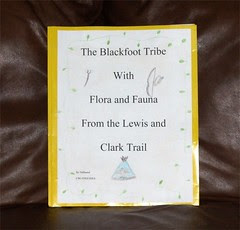 Nate's cover
Originally uploaded by Teckelcar
Part of the requirement for the project was an illustrated cover for the report and Nate did a lovely job. He created the text using our computer, printed it our, decorated all around the edges with a leaf and vine motif. Then scattered around the words Nate drew pictures of various Blackfoot artifacts.

I thought the whole project turned out very well as did the teacher who granted Nate a 100%.
Posted by Sarah at 11:50 PM