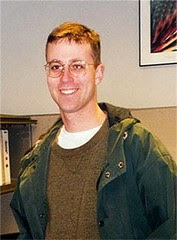 He was working on the 103rd floor of the World Trade Center as a network administrator for Cantor Fitzgerald's eSpeed division. He had spoken with his family just the day before to tell them he had survived a round of layoffs and that he still had his job at Cantor Fitzgerald.

Then he was gone.

He left behind his mother El, his father Bill, his sister Tracy and his girlfriend Suzanne.

From what I have gather he was a kind and loving man that also liked to have a good time. He was hardworking and lived life to the fullest. Friends and family could always count on him.

He was originally from Pennsylvania and graduated from Allentown Central Catholic High School. He then went on to Indiana University of Pennsylvania. He joined Theta Chi Fraternity, which has since Bill's death established a merit based memorial scholarship fund in Bill's honor.

He graduated in 1993 with a bachelor in finance and moved back to Allentown. He worked for Productivity Point, Inc. (PPI) until 1999. Bill then had an opportunity to work for Cantor Fitzgerald and he moved to New York City. Bill lived in South Seaport and loved taking advantage of all that New York had to offer.

A memorial fund has been established in Bill's name and its mission from the website is as follows:

The purpose of this fund is to encourage, support and assist the needy and disadvantaged to improve their lives during times of difficulty, regardless of location, race, religion, or gender.

The fund has flourished over the past eight years and has done a great deal of good to the community.

Note: for more tributes head on over to Project 2,996. I also did this in 2006 and profiled Robert Garvin McCarthy and again 2009 when I profiled Martin Boryczewski
Posted by Sarah at 12:13 AM