Artist of the week: Ninja! 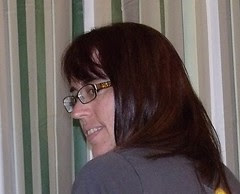 Me, a photo by Teckelcar on Flickr.
This week it's my turn to be the Artist of the week.

I was asked the other day if I was an arts and crafts sort of person. I wasn't quite sure how to answer. I do like to build and create things. I have created and updated two club logos, designed Jake's Bar Mitzvah invites from scratch, I love to bake and decorate cakes, and I take endless pictures.

But actual crafts are not really my cuppa. So artsy yes, but crafty is a big no.

That said, I will do a craft if the mood strikes and there seems to be a need. 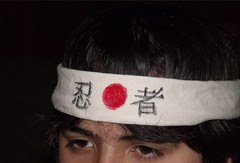 Which brings me to the Ninja part.

Jake has marching band camp going on this week and the next. To foster band spirit a theme is announce for each day. On Monday one of the drum majors announced that Tuesday was Ninja day. The only restriction was that the students could not wear black, the kids spends hours outside under the hot sun practicing in the parking lot. Being dressed head to toe in black would be a very bad idea.

So what to do?

Jake and I agreed a headband featuring the rising sun would be a good idea. I could whip one up on my sewing machine with some heavy white cotton fabric I had left over from a previous project. While googling away for design ideas I found a restaurant supplier's site that featured chef headbands that purportedly had "ninja" written on them in Kanji symbols. I found a Kanji website and verified the veracity of the symbols and decided to give it a try.

I think the headband turned out rather well. I wish I had some better markers for the job, but I wasn't willing to go out and buy yet another set. For an ad hock creation that took maybe 1/2 hour to put together, I'm very pleased (as was Jake) with the final result.

Labels: Artist of the week, Me