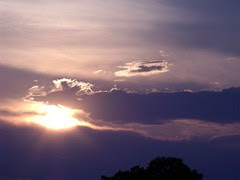 sky dragon, a photo by Teckelcar on Flickr.
This week's theme was a big one, as big as the whole sky.

So of course we had boring weather and I was stuck shuttling people around to their respective sports camps (soccer for Jacob, lacrosse for Nate).

I really wanted to photograph our subdivision's pond with the sky reflected in the water, but either the sky was unexciting or the water wasn't still enough. However I did have the good sense to keep my camera in the car. I would keep peering at the sky hoping for something to click.

I ended up taking a fair amount of pictures of sunsets. Jacob's soccer camp ended at 8:30 pm, prime time for pretty skies. There were a few shots that I could have digitally manipulated to be a bit more vivid, but that always feels like cheating. I generally only tweak enough to get the image true to the original. And that is why I chose this picture.

It is not the most technicolor of sunsets, if fact it's a bit blah. The picture is saved by the cloud, or rather the sky dragon. At the time I hadn't even noticed the shape of the cloud. Not until I had downloaded my pictures that the shape caught my attention. It is a lovely dragon making its way across the sky, the head picked out by the rays of the setting sun and the body trails behind. I don't know how I missed it at the time. It almost makes up for the missed heat lighting from earlier in the week.