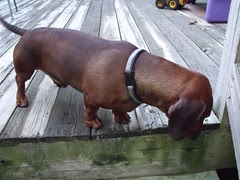 Dell Investigates, a photo by Teckelcar on Flickr.
As I think the whole world knows by now, Virginia had a bit of an earthquake today. It rang up and down the Atlantic seaboard and across the continent.

I was standing in an open garage digging out a late lunch from the outside fridge after just returning home from dishing out lunch to marching band and running errands (it was a busy mid-day). With the first rumble I glanced at the hot water heater then as it continued I started to wonder what on earth my children were up to.

Then I realized I was in the middle of a real live earthquake.

I strolled out of the garage, more amused than scared. It felt and sounded like I was on top of and out of balance washing machine. It was very odd seeing the ground vibrate. I shouted to the guys across the street working on my neighbor's house and they thought it was wild. It seemed to last well over a minute. Nate, meanwhile had ushered his siblings outside along with the dogs. The whole experience was very surreal. Rebecca was upset, but calmed down a bit when I pointed out the dogs were clearly unperturbed. Their only reaction was "Cool everybody is outside!"

The only bad part was I had a devil of a time getting a hold of Larry. Cell phones were swamped and the land line was a bit locked up. I was able to reassure various friends and parents that I and the children were fine. Half an hour or so Larry was let back into his building and was able to give me a call. I wasn't too worried about him, his office is in a solid building that also houses the Governor's offices, however it was a relief to hear his voice.

As for the aftershocks, I haven't felt a single one.
Oh and my dogs are not at all earthquake sensitive, once back inside they conked out and slept the rest of the day.