Where I Was Last Week 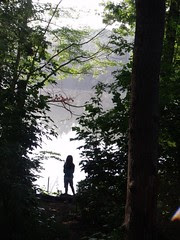 Rebecca, a photo by Teckelcar on Flickr.
Normally we do just one big trip in the summer and that had happened last month.

But this year we decided to mix it up a bit.

Since our trip up north was on the short side due to various commitments and we had such a good time this past spring at Shenandoah River State Park we thought we would give another state park a try. We looked up various parks in the state and settled on Bear Creek Lake. We could swim, fish and canoe! And as an added bonus, the park is about an hour out of Richmond.

hursday I had to drive Jake back for an evening marching band rehearsal.

The cabin was pretty much the same as the one we stayed in last spring, right on down to the wilderness themed upholstery on the furniture. Larry had the brilliant idea that since there was no dishwasher, everyone should wash their own plates, glasses, and silverware. That certainly made my life easier!

As for the park, the lake was a bit smaller than we envisioned. However, that didn't stop us from using the canoe on a daily basis. Nate brought his best friend along and the older boys would frequently take the canoe out and try to do a bit of fishing. They lost quite a few lures, but after switching to live bait Nate was able to snag a crappie.

Max and Rebecca didn't do much in the way of fishing. Instead they had fun at the small swimming area/ beach on the other side of the lake. Rebecca even joined me in swimming across the lake. Actually it was more kick-boarding since she is not a strong swimmer. That little adventure was a great deal of fun even though we got admonished by a park employee for 1.) swimming outside of the swimming area and 2.) swimming when the lifeguard was no longer present. We survived and were allowed to return to our side of the lake.

We all had a great time and look forward to our next state park adventure. If you click on the picture of Rebecca silhouetted by the morning light it will lead you to my Flickr account where there is a whole slew of picture in the Bear Creek Lake photo set.