Artist of the Week: Reader 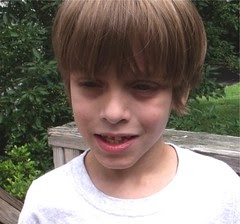 Max, a photo by Teckelcar on Flickr.
Max is this week's artist for his love of the printed word.Which did not come easily. After years of not wanting to read, Max has become a reader.

He literally can not go to bed without a book to read. This had led to the occasional mad scramble to find the boy something to read. So far he has plowed through the Harry Potter series, read because, I quote, "I want to know what I was missing from only seeing the movies." Now he has almost reached the end of the Guardians of Ga'Hoole. I'm not sure what to give him next. He loves series so I think I'll have to consult the local librarian. Maybe the Lemony Snicket Series of Unfortunate Events. They might be a bit dark for him.

When he does get overwhelmed by a book (and this has had happened a few times), he will solemnly announce that he is putting aside the book for a bit. This usually lasts at most two days, then he is consumed by the need to finish the book.

Max's love of reading is such a joy to behold. When you can read, you have the keys to a much wider universe.
Posted by Sarah at 11:58 PM