Artist of the Week: Tank 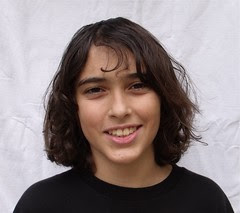 Nate, a photo by Teckelcar on Flickr.
This week's artist is my happy guy, Nate.

I took this picture of him for our congregation's bulletin. His Bar Mitzvah is fast approaching and our Rabbi likes to feature the up coming Bar and Bat Mitzvahs the month before hand. I have a feeling he is not entirely thrilled with Nate's long hair and is hoping he'll get shorn  before the big day.

Unless Nate wants that, it's not going to happen. I want Nate to be himself and if that means long curly locks, so be it. All I require is that it stays out of his eyes and he keeps it clean and brushed (which he does grudgingly). 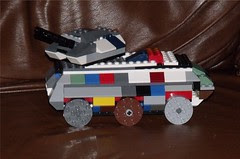 tank, a photo by Teckelcar on Flickr.
Long hair aside, Nate has an enduring fascination of all things military. Probably not enough to inspire a buzz cut and signing up, but enough to endlessly play war games and watch war movies. An off shoot of this interest is reflected in his Lego builds.

Nate's latest creation is this rather well designed tank. The turret freely rotates around and the gun can be raised and lowered. He also made a ramp that opens up beneath the turret. We don't have any viable tank treads, so it left it at with plain wheels. The whole thing is very well thought out and executed. Well done Mr. Nate.