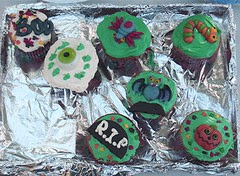 Rebecca's cupcakes, a photo by Teckelcar on Flickr.
Today was our neighborhood's Fall Festival. It's a cute little get together that features fun games for the kids, a hay ride ride, and a chilli competition. This year they even had a cupcake/cookie competition.

The cupcake thing alone was enough to get Rebecca interested. So Sunday morning I whipped up a batch of cupcakes for us to decorate. I wasn't sure if it was a decorating contest or a tasting one, either way I knew Rebecca would want to do her own thing.When I was out getting supplies I picked up an assortment of Gummi Halloween shapes that I knew she would like. It was a good call, Rebecca loved them and happily used them all, including the spider which is pretty major since she can't stand arachnids. 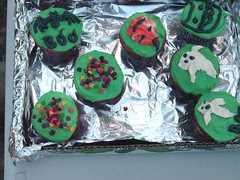 My cupcakes, a photo by Teckelcar on Flickr.
As for my cupcakes, I stuck with simple shapes and sprinkles. Not very exciting, but I was pretty happy with the end results.  The pumpkin (which is upside down in the photo) was a lot of fun to make. I utilized the ridges left from the decorating tip to simulate the lines. I had actually made an even better one, but I forgot to photograph it (I had picked that cupcake for the judging).

And hey, I don't mind not having it, because I got second place! Woot!

Not bad for an impulsive last minute entry. 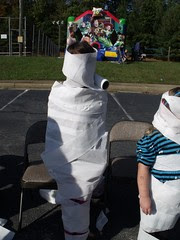 Mummy girl, a photo by Teckelcar on Flickr.
As for the rest of the afternoon, Rebecca and I had a good time together. Her brothers declined to accompany us ( a decision Max regretted later), so we got to have a girl's afternoon out. I watched her run around and try her hand at all the games. We did the cake walk together and Rebecca won a plate of cupcakes. Then we did the tp mummy wrapping. I wasn't the fastest wrapper, but dang it we had the best (and neatest) tp mummy. Good enough to garner to snow cones. Then we ended the whole thing with a hay ride.

It was an excellent way to spend a fall afternoon.
Posted by Sarah at 11:15 PM

They all look luscious, and I love the one-eyeball decoration! Nice for the two of you to get a girls' outing for the afternoon. The toilet paper mummy is very cool,as well.