Artist of the Week: Fountain

fountain, a photo by Teckelcar on Flickr.
This week the whole crew is Artist of the week, mostly because I don't know who got the original idea and I don't have the patience to listen to all the arguing if I ask the kids.

But I do know it was either Jake or Nate that started the whole fountain business. There are water jets at either end of the pool and we brought with us our hollow swim noodles. Somebody (or bodies) noticed that the noodles hole fitted very nicely over the jets. With a little bit of effort the water could be forced out through the length of the noodle, as demonstrated here by Jacob. 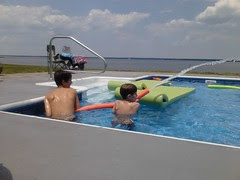 team work, a photo by Teckelcar on Flickr.
Nate and Max wanted in on the action and they teamed upat first on the other end of the pool. Since it was the deep end it was a bit tricky and required one person to keep the noodle in place and a second to direct the flow. They ultimately moved down to the shallow end where it was much easier. They had a blast working together and spraying their siblings.

At one point they had quite a battle going on with the pool floats (the green floating mats) being used as barriers. The kids even draped a mat over themselves and sprayed out from beneath. I got a few pictures, but the cell phone didn't do a good job in capturing what was going on.

pool fun, a photo by Teckelcar on Flickr.
Anyhoo, they all had fun and even Rebecca got to man the hose.

I particularly like this shot since I have all four kids in the picture and the fountain is arcing up and over Nate and Max. It was a pretty neat effect and I'm glad I had at least my cell phone's camera. I had forgotten our "real" camera, but I wasn't too worried being stuck with just a cell phone. It takes surprisingly good pictures, it's main failing is the lack of optical zoom.