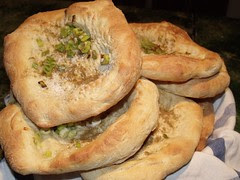 Oasis Naan, a photo by Teckelcar on Flickr.
This week's adventure in Baking with Julia was Oasis Naan. For a full run down on this week's recipe check out the hosts at Always Add More Butter (I love that blog's name!) and Of Cabbages and King Cakes.

I love Middle Eastern flat bread so I was very happy to see this Tuesday's recipe. Before making my naan I checked out the P & Q post to see if there were any tips and/or problems and I'm glad I did. Numerous people noted that the dough will puff out quite a bit when baking and you can not over dock (pierce the bread with a fork). I took the advice to heart and really went to town with my fork. And I'm happy to say it worked.

The bread smelled heavenly with the ground cumin. I decided to make my curried chicken as the entree with the idea of having the naan along side. Larry and thought the bread was delicious and used it to mop up the extra curry sauce on our plates. The bread chewy without being hard and was such a nice addition to the meal.

The kids were less than thrilled. Thy did not care for the savory bread. I think next time I'll make little pizzas for them utilizing the recipe for naan sans the green ones and pepper.

i've seen quite a few of us had made a meal out of this. lol, it was the perfect bread to use for a good indian meal! :)

I made some plain for my kids, then slathered it with butter. Big surprise: they gobbled it up! Have you tried ghee? Makes it taste much more like the restaurant version...

These look great.
I think the leftovers in my freezer will get some sort of pizza treatment...