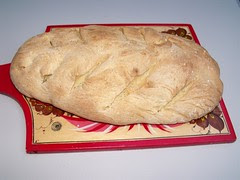 Semolina bread, a photo by Teckelcar on Flickr.
Between being out of town and not being a fan of biscotti, it was easy giving the hazelnut biscotti a miss; bread, however, is never to be missed. This week's challenge was Semolina Bread and you can find the recipe at this week's two hosts: Keep it Luce and The Way to My Family's Heart.

I picked up the semolina flour this weekend in preparation for today's baking, so it was pretty much a done deal in my mind that I would be making bread when Jake asked when I was next going to bake bread. He loved the Irish Soda Bread and the White Loaves and was hoping to get me to bake either of them. I reminded him that I make challah on Fridays, but... as he pointed out, we pretty much inhale it during dinner. He wanted something to snack on.

Therefore I have a very happy boy in the house when I told him about the loaf I just made. Jake practically sprinted over to the counter to cut himself a slice or two. Judging by the contented sounds he was making the bread hit the spot. I liked it as well. It has a nice crust with a bit of chew to the bread. The loaf is actually far flatter in real life, next time I'll do a better job in shaping the loaf.

Looks great. I liked that it was chewy, too

Nice loaf! I did like the texture of this bread. I'm sure I'll make this one again.

Isn't it nice when things get inhaled (other than wishing everyone woudl take time to savor your efforts ;-) )
Looks great!