Artist of the Week: Fabulous Hats 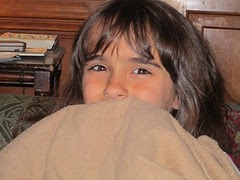 Rebecca, a photo by Teckelcar on Flickr.
This week's artist is a rather camera wary Rebecca.

She didn't want her picture taken and kept hiding under the blanket. I took a picture of her feet and at that point she decided it was better to cooperate. After I took the picture posted here Rebecca commandeered my camera and got some absurd pictures of her two middle brothers.

Nate and Max had no problem hamming it up for the camera. As for the art, well it doesn't have any opinion about photography, yea or nay. 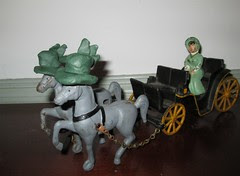 coach horses, a photo by Teckelcar on Flickr.
Well maybe neigh, since it is a couple of hats for horses.

The cast iron coach and horses was one of my childhood toys. I had completely forgotten about it until I pulled it out of a box my mom had in storage. Much to Rebecca's delight I passed it on to her. There was a second human figure, the horses' driver, but I'm not sure where he is now.

Anyway Rebecca is rather fond of the set and this week she decided that the horses could use some head-wear. 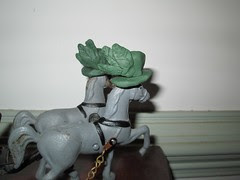 Rebecca went all out, from brims to feathers. She even did the detailing on the feathers so that you would know exactly what you are looking at. I don't know what day she created the hats, just one day I saw them.

It's Rebecca's version of yarn bombing, but with clay and I love it.
Posted by Sarah at 11:39 PM