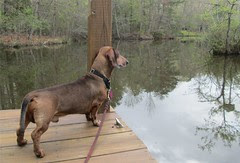 John, a photo by Teckelcar on Flickr.
I'm a bit frustrated now. The picture group I had been a part of has changed to the point that I no longer want to participate. It is all facebook dependent and I end up missing posts. It was far better when it was Flickr group, I could easily find the challenges and the pictures. Now I have wade through many layers of pages to find anything out.

So for now I'll just pick out my favorite picture of the week and post it here.

I took this one of John on Tuesday. I dropped my camera in my pocket as I headed out the door for the morning walk. It was a pretty nice day and I felt like taking pictures. I did a short detour to the ponds edge, I wanted to see what the dogs' reactions would be. Both were not terribly interested in the water, but up on the dock John came to attention when he saw a duck paddling along. Fortunately the duck was swimming away otherwise I think John might have tried to catch it.

I think it is a fantastic shot of John. He is naturally stacked himself in a lovely show pose, I could never get him to look that good in the show ring. Apparently I needed to bring a duck along and have it waddle out at opportune moments. Somehow I don't think that would go over to well with the other exhibitors.
Posted by Sarah at 11:53 PM