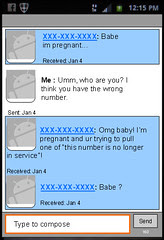 text, a photo by Teckelcar on Flickr.
Not quite a year ago I entered the modern era of cell phones. No longer do I have a simple phone to make calls and take rather bad pictures, now I have a smart phone plus an inexpensive data plan that gives me unlimited texts and streaming (go Virgin mobile and dump your contract).

I very rarely get wrong numbers, mostly they are from a little league coach from a neighboring county. He somehow mixed up a number and ended up with phone. Texts are also very rarely not for me, the one notable exception being the series featured here.

I tried to inform the sender that I wasn't her baby daddy and from there it got even funnier. The whole idea of me, a middle aged woman, being a baby daddy, is to me beyond hilarious.