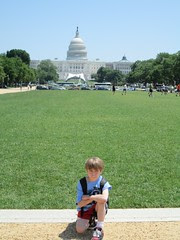 the Capital and Max, a photo by Teckelcar on Flickr.
Today was the big fifth grade field trip to Washington DC and I got to spend the day playing tourist with Max.

Our school does the big DC trip a little differently than most others. Instead of large groups of students being herded about on a set schedule we have as many parent chaperons willing to come allowing  us to scatter to the for winds. Each chaperon has one, possibly two students, we are dropped off at the Museum of Natural History at roughly 10 and picked up at the Air and Space Museum precisely at 2:30 pm. DC traffic being what it is if we are just 5 minutes late on our departure another hour is added to the drive.

As a result the kids get to go to the museums they want.

Max chose the Museum of Natural History, the National Gallery, and the Air and Space Museum. The later was only the result of A) we had lunch there and B) that was our pick up point. He really wanted to go to the Lincoln Memorial, but with a half hour hike to and from he decided it wasn't worth the effort. The weather was perfect, not at all the scorcher that was originally forecast. I had a good time as did everybody else on the trip.
Posted by Sarah at 11:45 PM