Cheesecake with Strawberry and Rhubarb Compote 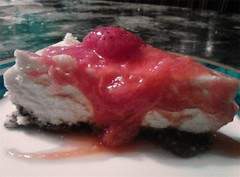 Cheesecake with Strawberry and Rhubarb Compote, a photo by Teckelcar on Flickr.
So yesterday this happened.

I asked Larry what he wanted for dessert yesterday and he said cheesecake. Initially I demurred, having just made a chocolate one on Thursday to bring to the Friday congregational potluck and it being a dessert that our guest, Meryl, did not care for. He then thought strawberry rhubarb pie would be good. That too was on Meryl's no fly list, so I said the heck with it all, I'll just make Larry happy and make the cheesecake. At that point, with the whole strawberry-rhubarb pie thing in my head, I had the idea of making a strawberry and rhubarb compote as a topping.

I have never made any sort of a compote before so it was off to the internets for research.

I hit upon this one by David Lebovitz.. It read well, was quick and easy to make,  and (this is key) I had most of the ingredients. All I needed was rhubarb, which was a bit hard to find, but not impossible. The end result was sublime. It was fabulous straight out of the pot and on the cheesecake.

As for the cheesecake, Meryl tried a tiny crumb and discovered the magic of a really good homemade cheesecake. Now she can't wait for the next time I make a chocolate one.