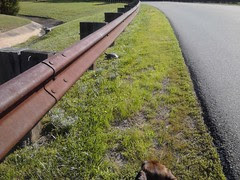 Turtle Crossing, a photo by Teckelcar on Flickr.
Twice this week the dogs and I have encountered rather large turtles during the morning dog walk. Both times the turtles were red eared sliders and were roughly the size of a bike helmet. I'm pretty sure they were different turtles since Thursday's turtle had a scar on it's shell, most likely from a boat's propeller, and today's turtle had an unblemished shell.

Both times the dogs completely lost their collective biscuit. Once they caught sight of the turtles they were howling and lunging against their leashes. Thus I couldn't get very close for a proper turtle picture. The closer I would get the more obnoxious the dos would become, driving the turtle away far us as fast as it could.
Hopefully the two I saw will not return to the roads and stay low. It would be a pity to have them picked off by a car.