Of Towels and Tournaments 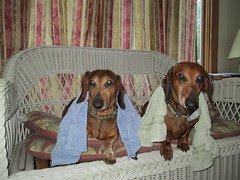 IMG_0735, a photo by Teckelcar on Flickr.
Big doings this weekend. Saturday was both Towel day  and the start of the soccer tourney that Rebecca's team was entered and Sunday was the conclusion of said tourney.

Now Towel Day is the celebration of Douglas Adams and his works and what better way to mark it than a reference to the Hitchhikers Guide to theGalaxy. To whit:


Towel Day: A Tribute to Douglas Adams
Monday 14 May 2001 06:00am PDT
Douglas Adams will be missed by his fans worldwide. So that all his fans everywhere can pay tribute to this genius, I propose that two weeks after his passing (25 May 2001) be marked as "Towel Day". All Douglas Adams fans are encouraged to carry a towel with them for the day.
So long Douglas, and thanks for all the fish!

As you can see both Dell and John are in the proper Towel Day spirit and have their towels at hand, or rather paw. 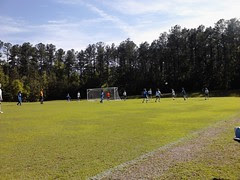 tournament time, a photo by Teckelcar on Flickr.
Now as far as soccer was concerned, it was a lovely weekend. Tempertures were low and it was not raining.The girls started with a bang and handily won their first game on Saturday. The second one far closer and we lost by two goals. However, this was good enough to secure a berth in the semi-finals as a second seed.

Sunday dawned clear and bright and the girls were keen to go. They were playing a team we had lost to twice during the regular season, the first time our team was crushed and the second time (a mere two weeks ago) I think we lost by just one goal. Our team had come a long way since last fall and wee ready to take the other team on.

It was an incredible game to watch as the two teams really picked up their level of play. They battled back and forth with both teams pulling out all the stops. The final score was 0 - 0, but it was far from boring. At the end of the game the players on the pitch were called to the center by the referee. He set them up for a penalty shootout to determine which team would go on to the finals. It was a real nail-biter and we ended up missing by one. Our girls were sad, but not crushed. They knew they had done an outstanding job.
Posted by Sarah at 11:56 PM