Artist of the Week: Soccer Tourney 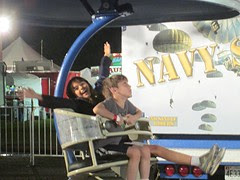 Away We Go, a photo by Teckelcar on Flickr.
This week's artist, or rather artists are Max and Rebecca.

I took this picture of them at the county fair. It was far less than ideal weather, what with the periodic downpours', and yet that made it all the better. There were no lines and for once it didn't feel like we were on the surface of the sun. They both had a wonderful time and were even willing to go on the rides together.

This past weekend they also spent some time together. Both of their soccer teams were entered in a tournament over in Williamsburg. We headed over on Saturday and were on the soccer pitch bright and early for their first games. Rebecca's team had another game shortly after and in the short time between their second games , I scooted over to the hotel we were staying at to check in. When we came back after Max's game we relaxed in the hotel. Rebecca hung out with her teammates and Max spent time with his teammate that was staying with us (he's a great kid and is Max's best friend. His mom was stretched mighty thin last weekend and I offered to take him in. At this point in the tourney both teams had one loss and one win. putting Max's team second place in its bracket.
On Sunday Rebecca had two scheduled games (for the girl's team it was round-robin affair) while Max's team had made it to the semi-finals, if the boys' win, then they would play in the finals. Unfortunately it was not to be and they lost. However it was not too shabby for a team that up until Saturday had yet to of played a game together. As for Rebecca's team, they hung in there and played some very tough competition to a tie and lost to the team that completely dominated the game. Both Max and Rebecca conked out in the car during the ride back home. It was an exhausting weekend.
Posted by Sarah at 11:52 PM