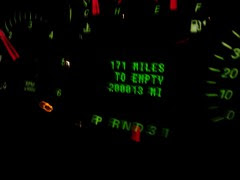 200k, a photo by Teckelcar on Flickr.
Last Friday the van hit the 200k mile mark. The same van that I just fixed so it would pass inspection. Yes the check engine light is on, but really it would be more surprising if it wasn't. As my mechanics observed vehicles like this are not known for lasting this long.

The big event itself happened while I was driving back from the Kol Nidre service. I glanced at the odometer and let out a big whoop. Nate, who was riding shotgun, said we should take a picture so I told him to use my phone. The resulting picture is a bit blurred, but it is legible.