Artist of the Week: Repetition 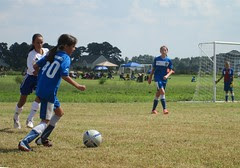 Rebecca, a photo by Teckelcar on Flickr.
This week's artist is Rebecca with a couple of pieces from school.

The picture here is from a game a few weeks ago. The girls tried hard, but were outclassed by the other team and there were some decidedly odd calls. You know it is not good when the ball goes out and both teams wait for the referee to decide you gets the ball. Any way, I saw some good plays by our team and it was a worthwhile experience. 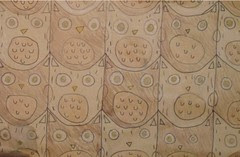 Owls, a photo by Teckelcar on Flickr.
Which brings us to the art. Both pieces are a study in geometrical symmetries made with interlocking patterns. I immeadetly thought of some of the works by MC Escher when Rebecca pulled these out of her backpack.

The top one is composed of owls, with the owls alternating between light and dark. It is interesting to note (at least for me) that patch of feathers on the breast appear to alternate in color as well. In reality it is an illusion created by the changing body color. 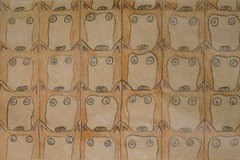 Foxes, a photo by Teckelcar on Flickr.
Next in line is composed of some very surprised foxes.The pattern is smaller than the aforementioned owls and as a result she got far more foxes on the page. I find the large eyes of the foxes to be a bit more intense than the owl page. That said I like both pieces. There is a sort of fun air about them and i think she did a lovely job.
Posted by Sarah at 11:57 PM

Tesselations is the technical name, I think, for these kind of identical, interlocking element things (oddly enough, I took a quilt class on how to design these).

I love the foxes, though I really like the detail in the owls. Love the kind of buff color, too.

Thank you Diane! I knew there was a word, I just could not for the life of me remember it.