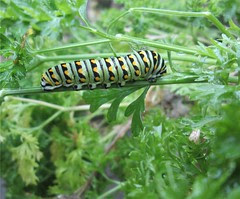 Handsome Fellow, a photo by Teckelcar on Flickr.
Rebecca announced today that there was another large caterpillar out on the deck. This one, however, wasn't as large or as gross as the previous denizen of our deck garden and was in the parsley, not the tomatoes.

Intrigued, I grabbed my camera and followed Rebecca out to the deck. It took her a moment, but she was able to find the caterpillar in question.

About an inch and a half long, it was a substantial sized critter. After a little bit of research I found out that it is the caterpillar form of the  Black Swallowtail butterfly. Interestingly enough it is also known as the parsley worm and that is exactly where Rebecca found it.

I hope it survives the upcoming winter because it's a bit late for butterflies around here and this is one of my favorites.
Posted by Sarah at 11:12 PM