The Girl Loves Her Bon-bon 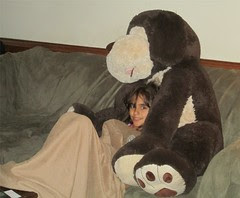 The Girl Loves Her Bon-bon, a photo by Teckelcar on Flickr.
This is Rebecca with her beloved Bon-bon. Primarily Bon-bon stays upstairs in Rebecca's room, but once in a while Rebecca totes this rather overlarge stuffed animal downstairs.

For a very long time Rebecca has wanted a super-sized stuffed animal. I wasn't interested in getting her one because 1) she already has a ridiculous amount of stuffed animals and 2) the over-sized stuffies have the prices to match. So we have been at a stalemate.

During one of my weekly Costco runs Rebecca tagged along and it just so happened that they had a whole selection of over-sized stuffed dogs for sale. Rebecca was smitten and when she saw the price was merely $20, she asked if she could get one. I said yes she could, BUT she had to pay for it. This resulted in mad calculations on her part on exactly how much cash and how much allowanced money she had banked.  She was a bit short, but would soon earn the difference. We settled on her coming back once she had the money and she could pick out her stuffie.

A couple of weeks passed and Rebecca had her money. We had a brief scare at the store when we could not find the stuffed dogs. It was very possible that they were sold out and that would be a crushing blow for the both of us. Rebecca wouldn't get her hard earned toy and I would come off as a big meany for sticking to my guns about not advancing the money. Fortunately the toys had been simply relocated and there was still plenty to choose from. She spent a long time looking over the toys and settled on the dark brown version. All that was left was purchasing this over large toy and bring it home.

As for the name, I suggested it to Rebecca. She loved the idea of her enormous chocolate brown dog being named after a tiny chocolate covered treat.