Artist of the Week: Mount Everest 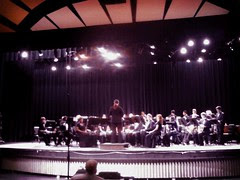 Wind Symphony, a photo by Teckelcar on Flickr.
This past weekend was the annual district assessment for school bands. Jacob's school hosts the event and everybody, parents, students, and the band director work their collective tails off to make the whole thing work. We have had the honor of hosting this event for quite sometime due to our hard work producing a well run affair that runs on schedule. If you are scheduled to go on at 5:15pm, by gum you will be on stage no later than 5:15 pm. This year we had to rejigger the schedule a bit to slip in an extra school. They had been originally scheduled for Friday, but they had a snow day and couldn't come. It would be a shame for all their practicing to be for naught, so we made it happen. None the less we still ended on time.

Below is part of their performance, the piece is titled "Mount Everest." I apologize for the poor sound quality. I was using my cell phone and it really did not do justice to the performance. It sounded much better in person.