Bowed, But Not Broken 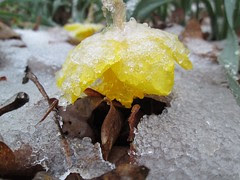 icy bloom, a photo by Teckelcar on Flickr.
Somehow I got in my head that yesterday was Wednesday, apparently traveling followed by two days of schools starting with a two hour delay messes my perception of what of the week it is.

Anyway this daffodil is encased in ice from Sunday night's all the way to Tuesday morning's wintery mix of doom. It wasn't as bad as the picture would make you believe. For the most part the roads remained clear until Tuesday and that was due to the cold temps finally cooling down the roads so that the ice/snow/whatever could stick.

The flowers, on the other hand were all encapsulated in ice from day one. Which was a good thing because the ice gave a big of insulation from Monday night's bitterly cold temperatures. The ice is gone now, but the flowers are still a bit droopy. I don't know if they will fully bounce back, but they are still alive.
Posted by Sarah at 11:45 PM