Artist of the Week: Tourney Triumphs 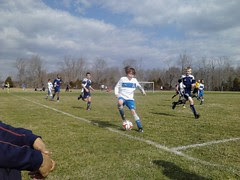 Max in Action, a photo by Teckelcar on Flickr.
As I mentioned before we had all sorts of soccer going on this past weekend. Both Max and Rebecca had soccer tournaments, his in Stafford, Va and hers in Virginia Beach. Obviously one parent couldn't do both, so Larry took Rebecca and I took Max.

It was a good weekend for soccer with the seemly weekly wintery mix of doom holding off until Sunday night. It was relatively warm on Saturday and I got this great shot of Max moving the ball down the line.  It was taken during the first game that they lost 5 -2, however the team's play was much better than the score showed. In the second game of the day they completely shut out their opponents at 5 - 0!

Team, a photo by Teckelcar on Flickr.
Sunday was grey and cold with the parents all huddled on the sidelines. I was a little less inclined for photography and the best I got was the team banding together before the game. The cold didn't seem to bother them and the coach urged them on by telling them they still had a chance for the playoffs. They played hard and won again, this time 3 - 2. Unfortunately by the way the tournament was scored, they just missed qualifying for the play-offs. However, this was by far the team's best showing. This seasons looks to be quite promising.
Posted by Sarah at 11:30 PM