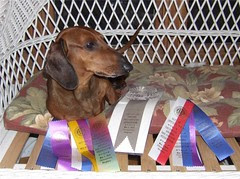 Dell and his ribbons
Originally uploaded by Teckelcar
The Delly belly had a busy weekend.

Friday late afternoon I met up with his breeder while she was on her way to a dog show over in Chesapeake, VA. I had a full weekend so I couldn't bring himself, which was fine by me. Diane and her daughter (who by the way is a far, far better handler than I ever could be) were going and it was easy enough for them to meet up with me on the way to the show.

Dell was entered both days and as you can see he got lots and lots of pretty ribbons.

On Saturday he got first in his class, winner's dog (best of the winners in his gender), best of winners (best class dog of both sexes), best of opposite sex. There was also a bred by exhibitor competition and her garnered best of variety (smooth dachshund) and went onto group competition and got a group 4 (fourth place in the hound group- the big silver rosette).

On Sunday he did even better. Not only was he best of winners, but he got best of variety! I think he defeated a special (finished champion) and therefor picked up an extra point.

So now all Dell needs are his two majors and then he'll become a champion. Way to go Dell!
Posted by Sarah at 11:52 PM

Wow - congratulations, Dell. He looks pretty proud of those ribbons, too.