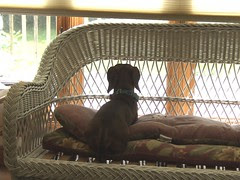 John
Originally uploaded by Teckelcar
Dell is off to a big five show cluster over Memorial Day weekend. I did the drive up to Freddysburg to transfer him to his breeder today and this weekend he'll get handed over to his handler. Majors are hard to come by now and I don't have the time nor money to enter him willy-nilly, so he's in the hands of a professional. Hopefully out of the five shows he'll do some winning and finish his championship.

Meanwhile poor John is an only dog, stuck at home. He'll miss his buddy Dell. They spend a lot of time wrestling, chasing and sleeping together. Although I will point out at times even John gets exasperated by Dell's dimness.

John has discovered he get Dell all hetup to go outside by barking at the door or window. I'll open the door, Dell shoots out and John strolls away.

Dell falls for this every single time.

And sometimes Dell will do it to himself.

They were looking out the window when something caught Dell's eye. He started wildly barking and I swear John rolled his eyes and calmly sat down. Dell rushed to the door, I let him out and John serenely watched Dell careen off into the woods in hot pursuit of... nothing.

I think things are going to be a bit quieter around here for the next week and a half.
Posted by Sarah at 11:55 PM