Artist of the Week: Symphonic 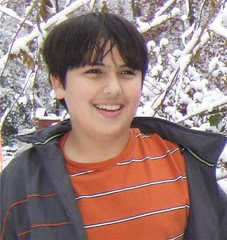 Jake
Originally uploaded by Teckelcar
Jake is this week's artist for his recent Holiday Concert.

Now that marching season (Who knew there was an official marching season?) is over, the symphonic band goes into full gear. During the school year they have been learning various pieces of music in band class. Last Thursday the 9th, the Symphonic Band (of which Jake is a member) along with the Wind Symphony jointly performed for the 2010 Holiday Concert.

The Symphonic Band and the Wind Symphony played three pieces of music apiece. Unfortunately my camera's batteries gave up the ghost very early on in the concert. I was only able to record just part of the first piece, "Christmas of the Toreador," performed by Jake's band.


I thought they sounded great. My camera, however, did a poor job capturing the richness of he band's sound. Even my entourage of Nate, Max and Rebecca found the concert to be pretty good. Rebecca particularly enjoined Carol of the Bells, the third and final selection of Symphonic.

What made the whole concert really amazing was that the schools bad director had just gone on maternity leave about a month ago. She was able to attend the concert with he wee babe, but purely as a member of the audience. Her substitute very ably picked of the reins and kept the band going during her absence.

I can't wait for the next concert when the band director is back. It should be fantastic.
Posted by Sarah at 11:56 PM