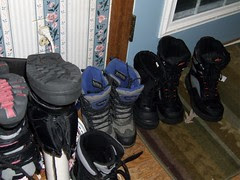 snow boots
Originally uploaded by Teckelcar
Today would have been the penultimate day of school before winter break. However, the weather felt differently on the subject and as a result winter break started today instead.

Our school system threw in the towel last night, but only after every other school district declared a snow day. For a few hours last night I had a very sad twelve year old mooning about the house until the word came that school was off.

The snow took its own sweet time getting here. When it did finally arrive, oh boy did the roads get greasy fast. I was out at 11 to pick up a few things and it was not particularly fun. At least all the other drivers recognized the treacherous conditions and we all kept he speed well below the speed limit. Once I got back home, that was it for the day. No more last minute dashes to the store.

As for the kids, they enjoyed their day off in grand style. Plenty of Wii, the annual checking out of the snow gear (snow pants were good, but we need two pairs of boots), and an epic snow battle throughout the yard and into the woods. The only way it could get better would be if they could get tomorrow off .

With a bit of sleet that appeared at the end of the storm and the freezing temperatures the roads tomorrow morning the roads will be horrific. The school district has, wisely decided to cancel school on Friday.
Posted by Sarah at 10:17 PM